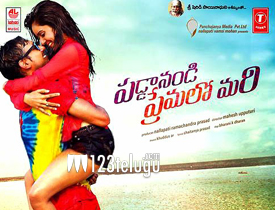 Young hero Varun Sandesh, has been lying low as some of his previous films failed miserably at the box office. His latest presentation is Paddanandi Premalo Mari which has hit the screens today. Let’s see how it is.

Ram(Varun Sandesh) is a college going youth who falls in love with Shravani(Vrithika Sheru). As time passes by, even Shravani accepts his love and when everything seems to going fine, a small misunderstanding develops between the couple and they get separated.

This is also the time when a dreaded goon named Lankapathi(Aravind) lands his eyes on Shravani and decides to marry her. Rest of the story is as to how Ram successfully manages to save her from Lankapathi and also clears his misunderstanding during the course of time.

The twists that are showcased in the film are quite interesting. The director has managed to invoke these twists at regular intervals which impress you decently. Varun Sandesh is apt in his role and carries the entire film on his shoulders. He has improved with his dances and has matured as an actor. The twist during the climax featuring the main villain has been executed quite well.

Vrithika Sheru gets a plump role and impresses in her character. She looks nice and shares a decent chemistry with Varun Sandesh. Aravind is pretty good in his negative role and has a bright future. Tagubothu Ramesh and Venu bring in decent laughs. First half of the film is youthful where as the second half has some decent moments. Posani Krishna Murali is apt in his supporting role.

Paddanandi Premalo Mari suffers from lack of entertainment. The makers had a lot of scope to invoke enough fun into the script but failed to do so. Some basic good comedy elements could have helped this film even better.

Songs are just about ok but come as road blocks during the second half. Camera work is decent and covers the Palandu area quite beautifully. Screenplay of the film is a big asset as most of the twists and turns have been executed at right moments. Credit should go to debutante director Mahesh for narrating a simple story with interesting screenplay. Editing is below par as a song and a few scenes could have been easily edited in the second half.

With Paddanandi Premalo Mari, Varun Sandesh can be relieved slightly as this film is definitely better than his previous duds. Interesting twists and decent performances are some basic plus points. On the flip side, some forced commercial elements during the second half and lack of basic entertainment let down the film to an extent. You can give this film a shot if you have absolutely nothing else to do.