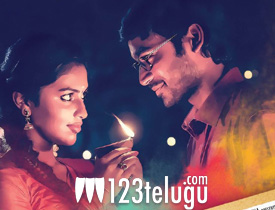 National Award winning actor, Dhanush has become quite a popular face in India. His latest Tamil film, VIP has now been dubbed into Telugu as Raghuvaran B.Tech. This film is brought to us by producer Sravanthi Ravi Kishore and has hit the screens today. Let’s see how it is.

Raghuvaran(Dhanush) is a jobless B.Tech graduate who stays idle at home. His father hates his attitude and keeps yelling at him all the time. Things get interesting when Raghu  falls in love with his neighbor(Amala Paul).

One fine day, when he is busy spending some cozy time with his beloved, an untoward incident occurs in his family and changes his life upside down. What is that incident ? How did it change Raghuvaran’s life ? That forms the rest of the story.

Major plus point of the film is Dhanush and his performance. Right from the word go, it is Dhanuh’s screen presence that holds you completely. Be it his carefree attitude in the first half or as a highly responsible engineer in the second, Dhanush has nailed it all the way. Story of the film is quite simple but the premise in which it is set is very good.

Amala Paul ably supports Dhanush and so does Vivek in a comedy role. The relationship that is showcased between the mother and son is outstanding. Saranya is top class as Dhanush’s mother and brings in a emotional effect to the film. First half is breezy and has quite a few entertaining elements.

After a racy first half, the second half becomes a bit predictable. The makers have taken a simple point and executed the complete second half. Entertainment quotient during this part gets bogged down a bit. Story wise, there is nothing new as the entire film runs on screenplay. There is some Tamil flavour which might not go well with Telugu audience. At least two songs could have been easily chopped off.

Background score by Anirudh is one of the major assets of the film. The simple story line is elevated with Anirudh’s thumping score and gives a huge kick to the film. Music is just about ok and so is the editing. Dialogues written for the Telugu version are decent and connect well. Screenplay is the major plus as the entire film runs on a tight grip.

Director Velraj needs to be credited for presenting a routine and normal story with some realistic and hear touching scenes. The way he has sketched different emotions right through the film is very good.

On the whole, Raghuvaran B.Tech is an interesting tale of a jobless youth with an underlying message. Even though the second half is a bit predictable and routine, Dhanush’s thumping performance and a entertaining first half makes up for a decent watch this new year.