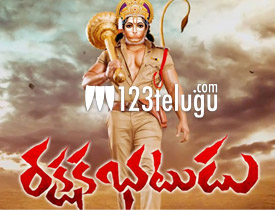 Rakshaka Bhatudu’s first look poster raised curiosity among the audience as to who the film’s main star was. This film which is directed by Vamsi Krishna Akella has released today. Let’s see how it is.

Ram(Nandu) and Mythili(Richa Panai) are a couple who decide to get married secretly. They run away to a village called Ananthagiri and get involved in all kinds of trouble.

This is the time when Anji(Sampoornesh Babu) enters the scene and saves the couple from all sorts of problems. Who is this Anji? What does he have to do with the couple? and who is the man behind the cop avatar which has been shown in the poster? To know answers to all these questions, you need to watch the film on the big screen.

Director Vamsi Krishna’s concept of projecting a real Rakshaka Bhatudu who saves the society is decent enough. Heroine Richa Panai impresses with her glamor and innocent looks and plays her part well.

Nandu is decent in his limited screen presence and brings some depth to the climax episodes. Sampurnesh Babu did a decent job and impresses with his performance in parts. Background score by Sekhar Chandra is good. Comedian Dhanraj, for the first time, did a serious and innocent role quite well.

Though director’s concept is okay, he failed miserably in executing it on screen. The opening shot of the film will generate some curiosity but from the very next scene, the film falls flat and does not pick up one bit.

After a point of time, the audience gets so irritated that they literally look for the exit doors. Star comedian, Brahmanandam’s comedy is yet another letdown and has no proper sync with the film.

Brahmaji and his team’s comedy episode in the police station will test your patience. Surprisingly, not even a single scene in the film has a proper conclusion. Noted actors like Supreeth and Kalakeya Prabhakar have nothing much to do in the film.

Director Vamsi Krishna completely disappoints with his illogical narration. After the first fifteen minutes, he deviates the film completely with his shoddy work. Editing work by Amer Reddy is below par as most of the scenes in the film have been cut abruptly. Cinematography by Malhar Bhatt Joshi is okay. Music by Sekhar Chandra is fine but his background score is even better. Production values are very poor.

On the whole, Rakshaka Bhatudu does not contain anything expect the hype that was created from its first look poster. Though the film’s concept is good, the execution part is horrible. Sampurnesh Babu is the only savior who tries his best to bring some depth to the proceedings. But the poor production values and lack luster narration overshadow his performance and make this film a boring watch this weekend.