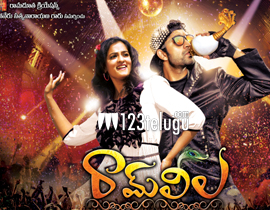 Young heroes Havish and Abhijith have paired up with the beautiful Nanditha for the youthful entertainer ‘Ram Leela’. Directed by debutante Sripuram Kiran, this film has hit the screens today. Let’s see how it is.

Krish(Abhijith) is a software professional in the US. One fine day, he comes across Sasya(Nanditha) on TV and falls in love with her. Abhijit comes back to India and somehow convinces Sasya to marry him.

The couple head to Malaysia for their honeymoon. Twist in the tale arises when Sasya leaves Krish and decides to meet her ex-boyfriend. Rest of the story is as to how Abhijit manages to win his wife back and where does Ram(Havish) feature in all this set up.

The performance of the lead cast is the major highlight of the film. Havish is decent in his role and has given a mature performance. He is specially good in the emotional scenes and has vastly improved with his acting capabilities. Abhijit plays his supporting role quite well. Nanditha attracts the audience with her traditional and glamorous looks.

Bhanu Chander has given an excellent performance in the film. Nagi Needu, Anitha and Krishnudu play their supporting roles well. The second half is quite good where as the first half has interesting flash back episodes. The emotional climax will surely go well with the family audience. S Gopala Reddy’s cinematography is yet another major highlight of the film. Madalasa Sharma’s item number will be liked by the masses.

Pace of the film is a bit slow in the first half as many scenes have been dragged unnecessarily. Ali’s comedy track is bad and spoils the flow of the film.

Placement of the songs in the first half irritates the audience.

As said earlier, S. Gopal Reddy’s cinematography is the biggest asset of the film. The outdoor locales have been showcased quite beautifully. Editing could have been better. Vissu’s dialogues work well and have been written with a lot of impact. Chinna’s backgroundscore is good.

Director Sripuram Kiran has extracted decent performances from his star cast. Production values are good and showcase the film in a good light.

On the whole, Ram Leela has an underlying message which has been told in an interesting manner. A slow and routine first half spoils the flow of the film to an extent. But Havish’s decent performance and interesting twists in the second half make this film worth a watch.
​
123telugu.com Rating : 3/5
Reviewed by 123telugu Team