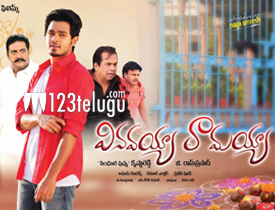 Yet another child artist, Naga Anvesh makes his movie debut with Vinavayya Ramayya. This youthful entertainer has hit the screens today. Let’s see how it is.

The movie is based in a village called Veerayya Palem. Chanti(Nag Anvesh) is a careless youth who falls in love with his childhood friend Janaki(Kritika). One fine day, he reveals his love for her but to his shock, Janaki rejects him point blank.

This rejection causes a huge heart break for Chanti. Seeing his horrible condition, Chanti’s friends kidnap Janaki from her wedding which is fixed by her father Chowdary(Prakash Raj). What will Chanti do now ? How will he fix this tricky situation ? Will he win his love at the end ? That forms the rest of the story.

Naga Anvesh makes an impressive debut with Vinavayya Ramayya. This young debutante has a lot of ease in his acting and is pretty good with his dances. His comedy timing is decent and looks comfortable on screen. As he has already done films as a child artist, he has a good grip on dialogue delivery.

Drishyam fame Kritika is decent as a full fledged heroine She looks beautiful in Indian attire and has done a good job in her role. Prakash Raj is impressive in an important role. Brahmanandam manages to evoke decent laughs as Patel Pahelvan.

Other supporting characters played by Ali, Shakalaka Shankar and Jabardasth Seenu do well as hero’s friends. While the first half has some interesting comedy, the second half has good family sentiments. Visuals are quite good in the film.

One of the biggest drawbacks of the film is the routine story line. Scripts like these have been dealt many a times before. There is nothing new for the audience to look forward to in this film. Certain songs have been placed in wrong areas. Narration is a bit slow as the film enters into its actual story only during the second half.

The love story between the lead pair lacks clarity and has not been elevated much. The second half has good scope for entertainment but the makers have missed out on that. The way certain characters make their transformation during the climax looks hurried up.

Vinavayya Ramayya is pretty strong in the technical department. Rasool Ellore’s camera work is outstanding as every frame looks colorful. The way he has showcased the lead pair is also impressive. Anup Ruben’s music is decent, but it is his background score which elevates the film to another level. Praveen Pudi’s editing is ok but it could have been even better if he would have chopped off a few scenes.

Dialogues written are impressive and so is the art direction. Coming to the director Ram Prasad, he has done a decent job. Even though he chooses a routine script, the way he has extracted performances from the lead pair is good. However, he should have written a better screenplay to elevate the film even more.

On the whole, Vinavayya Ramayya marks a decent debut for Naga Anvesh. His impressive performance, entertainment factor and certain family emotions are basic assets. If you ignore the routine story line and predictable nature of the script, you can give this film a shot for its typical commercial elements.