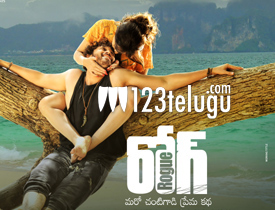 Puri Jagan is struggling hard to give a good hit under his belt. Losing no hope, he is back with yet another youthful entertainer called Rogue. Starring Ishaan and Mannara Chopra, this film has hit the screens today. Let’s see whether Puri gets his much-needed hit.

Chanti(Ishaan) is a reckless youth who hates women because his girlfriend(Anjela) cheats him big time. Upset with this, he gets into a tussle with one of the cops and breaks his legs. Seeing the cop’s family situation, he himself decides to help the family which also consists of a beautiful girl called Anjali(Mannara Chopra).

When things seem to be going fine, a psycho(Anoop Singh) who is on the run targets Anjali and starts following her. Rest of the story is as to how Chanti helps Anjali and falls in love with her during the course of time.

There are only a few assets for this film and one among them is the debutante Ishaan. The young hero looks quite dashing and has decent screen presence. Right from his looks to his performance, Puri has worked hard on Ishaan and presents him in a very stylish yet massy way. Thakur Anoop does his best in his negative role.

Surprisingly, Manara Chopra looks very good when compared to her previous films. She too has been showcased in a decent manner and Manara does well in whatever scope she had. The first half is just about okay and has some jokes on ex-girlfriends which look good here and there.

The entire second half of the film goes for a toss. Puri’s narration lacks clarity and logic as every other scene goes over the top time and again. The psycho killer is let loose and none of the cops manage to nab him even after he kidnaps close to 50 women. The film has so many silly scenes like these throughout and one would seriously wonder how come a great director like Puri can execute something like this.

Even though the female bashing looks good in the start, it becomes a tad too much during the later part. The way the psycho killer is dealt by the hero and all the scenes between them look way over the top. The film’s screenplay is bad as none of the scenes impress one bit during the second half.

Ali’s comedy is getting boring and outdated with each passing day. Even though Anoop Singh tries hard in his psycho role, his character has not been showcased well. The way he behaves and keeps sidetracking the plot many a time looks silly.

Production values of the film are top notch. The locations chosen, the stylish camera work, everything looks amazing. Music by Sunil Kashyap is just about okay but his background score is very good. Dialogues are in typical Puri style and suit the young hero well. Editing is just about okay and so was the styling done for the film.

Coming to the director Puri, it is very disheartening to see Puri execute a film like this. There is absolutely nothing story wise as a simple point is stretched through the entire second half. Puri’s trademark aggression and fun scenes are completely lacking in this film. The only place where Puri scores is that he has showcased Ishaan in a very good way.

On the whole, Rogue is a below average romantic drama which gets quite disappointing post the interval point. The lack-lusture story, tedious narration and over the top scenes make this film go downhill. As the film has been made to launch Ishaan as a movie star, Puri succeeds in doing it decently. But in this process, he ignores the rest of the proceedings and makes Rogue a routine and outdated film for the audience.