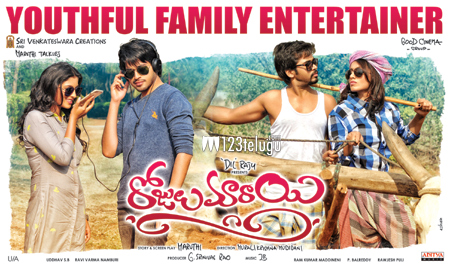 Rojulu Marayi created much hype with its trailers and the names associated with it. The film which has story by Maruthi and is produced by Dil Raju has hit the screens today. Let’s see how the film turns out to be.

Adhya(Kruthika) and Rambha(Tejaswini) are close friends who trap two innocent men Peter(Pavatesam) and Aswad(Chetan) and keep utilising them for their own needs. Twist here is that they also love two other guys and want to get married to them to have a safe life.

One fine day, they find out from a baba that whom ever they marry will end up loosing their life in the next ten days. To avoid this tricky situation, they plan to first marry Peter and Aswad and after they dying, continue with their life.

How will they convince these two to marry them ? Will Peter and Aswad loose their life ? What happens during the course of time ? To know answers to these questions, you need to watch the film on the big screen.

The entire first half is the biggest plus point of the film. The interesting proceedings, comedy, realistic scenes and performances give a major boost to the film. Not once during the first half you get bored and Parvateesam scores heavily during this time. It is his histrionics and realistic character showcasing today’s youth that entertains big time.

Tejaswini is superb in her character and performs with a lot of depth. She is a very talented actress who can do any sort of a role and hope that Tollywood film makers utilize her well. Krutika looks beautiful and is very good in all the emotional scenes. She had a complex role which she portrayed with a lot of ease.

The film has some hilarious comedy during the first half. Maruthi’s trade mark double meaning dialogues will also work well with all the B and C centres.

After such an entertaining first half, the film falls flat on its face. The entire proceedings take a severe beating as the film side tracks and becomes more or less like Prema Katha Chitram. At least there, comedy was good but sadly here things go haywire and not even seasoned actors like Ali manage to salvage the film.

The entire story is wrapped up in the first half itself and nothing much is left during the second part. The story is quite predictable and you can easily understand as to what is going to happen next. Also, the way things are ended during the climax lacks clarity.

Production values are neat as the film has some very good visuals. Music by JB is decent and his background score also enhances the film. Dialogues are hilarious and have been written keeping the current scenario in mind. Screenplay by Maruthi is superb during the first half but by the time the film reaches the end, things get out of place.

Coming to the director Murali, he has executed the film quite well and has managed to maintain the fun and suspense element quite well. But it is the weak writing during the second half that does not allow him to do much.

On the whole, Rojulu Marayi is a contemporary take on how girls in today’s society are. The film has all that you can expect in a Maruthi brand film. Double meaning dialogues, comedy, female bashing and a very interesting first half which keeps things entertaining. But it is the lack luster second half which lets down the proceedings and makes this film just a one time watch.