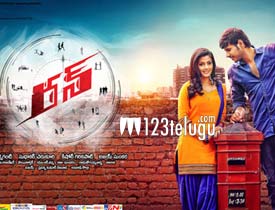 After a long gap, Sundeep Kishan is back with a comic thriller Run. Also starring Anisha Ambrose, this film directed by Anil Kanneganti has hit the screens today. Let’s see how it is.

Sanju(Sundeep Kishan) is a software engineer who looses his job during the recession time. Left with the responsibility of getting his sister married, Sanju takes a hand loan from a dreaded goon called Vaddi Raja(Bobby Simha).

As times passes by, Sanju fails to repay the loan and this makes Vaddi Raja upset big time. He confronts Sanju and threatens him to pay his money back by the same evening.

This is also the time when Sanju’s love interest Ammu(Anisha Ambrose) leaves her house for good and joins Sanju. Rest of the story is as to how Sanju manages all his problems and comes out from the evil clutches of Vaddi Raja.

The various twists and turns of the film are quite unique. The way every single character is linked to the main plot has been designed well. Once again, Sundeep Kishan does a sincere job. The way he has gone about his role of a frustrated guy showcases his improved acting skills. Sundeep now is at ease in front of the camera and gels supremely well in his role.

Anisha Ambrose looks beautiful but does not have much to do in the film. Comedy wise, Brahmaji once again impresses as Padmavati. The talented actor is now bagging interesting roles and is doing complete justice to them with his hilarious facial expressions and timing.

Bobby Simha makes an impressive debut as the bad guy but his character has not been handled well during the second half. First half of the film is pretty crisp with ample twists and comedy. Posani does his bit during the end and brings in some comedy.

After a racy first half, the tempo of the film dips slightly as some unwanted scenes and a song featuring Mahat Raghavendra takes centre stage. Too many characters join the fun as the climax is hurried on to us.

Anisha Ambrose has nothing much to do during the second half and the hero’s approach toward her lacks clarity and conviction. The way main villain’s character is ended and too many things happening during the climax makes things a bit bland.

Sai Karthik is becoming a master at composing background scores. Even for Run, his impressive score elevates the film big time. Dialogues are good and so was the art direction. Production values are top notch and the effective camera work makes the movie look realistic and crisp.

Coming to the director Anil Kanneganti, he has done an ok job with the remake. Though he could not get the essence of the original, he was partially successful in setting it up in Telugu nativity. Had he managed to narrate the second half in a better way, the outcome would have been even better.

One of the biggest advantages of Run is the crisp run time. A simple story interlinked with different characters and how they are unraveled during the end is what Run is all about. Barring the non effective narration during the second half and rushed up climax, Run has enough twists and subtle comedy which will make up for a decent watch this week.