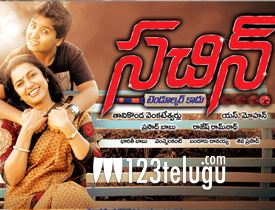 Swathi (Suhasini) is an  unmarried industrialist who has a mentally retarded brother Sachin(Master Snehit). Sachin is a die hard fan of cricket and idolizes Tendulkar.

One fine day, Sachin wishes to compete in a special cricket match to be held in Hyderabad. A confused Swathi approaches her boy friend Venkat(Venkatesh Prasad) who is a cricket coach. After hearing out all her problems, Venkat decides to help Sachin realize his dreams.

Will Sachin be able to play cricket like the other children ? Will his dreams come true ? That forms the rest of the story.

Suhasini portrays her character with a lot of ease and is superb in the emotional scenes. Venkatesh Prasad has done a decent job in his debut film and looks apt in the role of a cricket coach. Master Snehit has also done his part supremely well and is the major attraction of the film.

The human values showcased in the film needs to be appreciated. The way the director narrates the entire cricket match is quite engaging. Second half has decent moments and is carried out well.

Apart from the interesting story line, there are many drawbacks in the movie. The main plot is about a mentally retarded person but the director fails to involve his character right from the beginning. The first half of the movie is a big minus.

The reason for the child’s passion in cricket is not sketched out clearly. Screenplay is not up to the mark and lacks focus in the first half. The story does not have enough motivational scenes which are a must for films like these.

Some serious and emotional scenes end up in quite a silly manner. This movie also lacks the regular entertainment which the normal public look out for.

Cinematographer Prasad Babu does a decent job as few scenes during the cricket match have been captured well. Rajesh Ramnath’s music is below par and the background score is just about ok . Few boring scenes in the first half will test the patience of the audience.

The director opted for a good subject but was not able to handle it perfectly. Screenplay is bad as the entire movie is quite predictable. Despite good performances from the cast, the movie does not have enough scenes that will connect with the regular audience.

On the whole, Sachin Tendulkar Kadu had a perfect set up for a good message oriented flick. But the way it has been narrated leaves a lot to be desired. This film will be liked by the children because of their interest in cricket. Regular audience who are looking out for some sheer fun can give this film a miss.