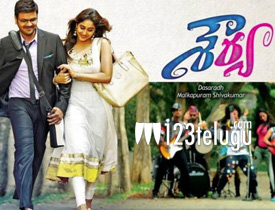 Touted to be an edge of the-seat romantic thriller, Shourya has released today to positive pre-release buzz and decent expectations. Showcasing Manoj in a revamped avatar, lets see how the movie fared.

Shourya (Manchu Manoj) is a highly educated individual who is in deep love with Nethra (Regina Cassendra). Due to unknown reasons, the couple decide to elope but an unfortunate series of events lead to Nethra being murdered. Twist in the tale arises when Shourya gets framed for the murder.

Why were they couple eloping? Did Shourya really kill Nethra? What is the actual story ? To know answers to these questions, you need to watch the film on the big screen.

Manchu Manoj, for the first time in his career is seen in a mellow and subdued role. He looks good and given his character, he plays it to the tee. He should be admired for trying out something new. Regina looks beautiful and plays well within the limitations of her role. Given his prowess, it’s a cake walk role for Prakash Raj as an investigation officer. Prabhas Srinu evokes good laughs with his small but entertaining role.

The story is filled with decent twists and also keep the proceedings interesting to an extent. The second half has numerous twists and turns which forms the crux of the story. The way the twists have been handled during the second half is also decent.

The first five minutes have also been showcased well, giving the movie a thumping start. Production values are decent. A crisp run-time is another asset for this thriller.

To start off with, the first half is a major weak point. Except for a couple of scenes, the proceedings get quite boring and mundane. The movie is a perfect example of a roller coaster ride where the twists interest the viewers but the story and scenes between the twists bore the audience to the core.

Nandu and Sayaji Shinde’s subplot abruptly ends with no solution. The songs are not great and act as major speed-breakers. The screenplay is yet another disappointment as the movie could have been showcased in a much better way with a tighter and racier screenplay.

Production values are quite good. Editing is sub-par. The background score manages to elevate a few scenes. Songs are disappointing and will be forgotten. Dialogues are average. Cinematography is decent and a few scenes have been showcased well. The screenplay is also jerky.

Coming to director Dasaradh, although he is experienced in family dramas, he failed to showcase this thriller in an intriguing way. The way the proceedings have been shown, especially during the first half leave a lot to be desired. If he had taken care of the first half and made the movie tighter and pacy, it would have been much better.

On the whole, given the pre-release buzz and expectations, Shourya ends up as a slight let down. Although, the twists and turns in the second half make a compelling movie, the first half falls flat and leaves a lot to be desired. Overall, Shourya might be an okay option if you have nothing else to do this weekend.