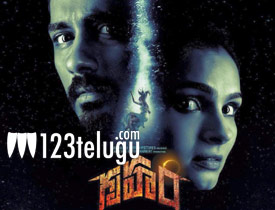 Siddharth is one actor who always comes up with different films all the time. He is now back with a very interesting horror thriller called Gruham which has hit the screens today. Let’s see how it is.

Krish(Siddharth) and Lakshmi(Andrea) are a couple who lead a happy life together. One fine day, a lovable family join them as their neighbors. As time passes by, one of the family members, Jenny, gets transformed into an evil spirit and starts troubling everyone badly. Who is this evil spirit? Why is it targeting the family? and how does Krish handle this entire situation? To know the answers to all these questions, you need to watch the film on the big screen.

One of the best points of the film are the spooky elements. Gruham is filled with horror effects right through the film and they scare you convincingly. Even though the story is old school, the narration is new as the set up has been elevated in a different tone altogether.

The first half is quite thrilling with some good horror elements being thrown in terms of sound effects. Siddharth is exceptional in his role as a surgeon and his performance in the climax is very gripping. Andrea is also impactful as Siddharth’s wife and the couple shares a sizzling chemistry on screen.

The interval block is the highlight of the film and gives a good adrenaline rush. The girl who did the role of Jenny was awesome as she creates a superb horror effect with her performance. The climax of the film and the Chinese angle to the entire film has been conceived well. Senior actor Suresh does a very good job as a psychiatrist.

As in every horror film, the story of Gruham is also the same. An evil spirit creating a conflict point and how the family suffers has been shown in many films before.

Once the twist is revealed in the second half, the film gets predictable until the climax. There are certain scenes where logic goes missing. The twist about the actual villain could have been elevated well.

Gruham is high on technical aspects and has a stunning set up throughout. As said earlier, even though the makers chose a routine story, they pumped the entire film with some great visuals. Credit should go to the camera man for showcasing the film in a stunning way. All the horror elements look superb only because of his captivating camera work. The sound design of the film is very good as it gives you goosebumps in many areas. Background score is yet another highlight and elevates the film to another level.

Coming to the director Milind Rao, he has done a very impressive job with the film. All the scenes he has narrated look quite new and believable. His narration of horror scenes and the way he has dealt with the suspense element is very good.

On the whole, Gruham is a true blue horror thriller which is to the point. There is no unnecessary hungama in the film which sidetracks the attention of the viewers. Great spooky scenes, taut narration and good performances are huge assets. The storyline is old school and has nothing new to offer. If you ignore this very point, this film ends up a thrilling watch this weekend.