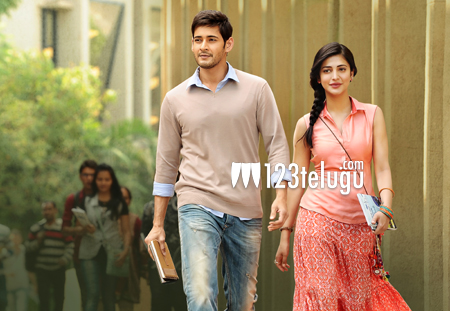 Srimanthudu, starring Prince Mahesh Babu and Shruti Haasan in the lead roles, is one of the much awaited films this season. The film’s audio, composed by music sensation Devi Sri Prasad, was released in a grand way earlier today. Let’s see how the complete album is.

Analysis : The album kicks off in style with an energetic number Rama Rama. Sung by Sooraj Santosh and Ranina Reddy, the lyrics penned by Ramajogayya Sastry are superb and with sparkling tunes, this song will definitely lift the spirits of the music lovers.The baritone voice of Sooraj accompanied by the stupendous chorus makes this song one of the best in the album.

Analysis : The second one in the album, Jatha Kalise, is pure class from the music sensation. With a sweet-toned tune throughout the song, the lyrics will refresh your mind and you will fall in love with this song soon after you hear it for the first time.The lyrics are decent. The singers duo Sagar and Suchitra did a fabulous job as their honeyed voices are a huge attraction in this song.

Analysis: Next in the album, Charuseela, is a typical number which we usually find in DSP’s album. Sung by Yazin Nizar, this song has got a good beat and the tempo doesn’t drop at any given point. Devi Sri Prasad’s rap in the middle of the song is an added advantage. Lyricist Ramajogayya Sastry is at his best with some catchy lyrics.

Analysis: Moving forward, we come across a strong emotional song ‘Srimanthudaa’. Although the duration is just over two minutes , it will be noticeable for its depth in the lyrics. Due credit should be attributed for the inspiring lyrics and Karthikeyan has given all his heart while singing this song.DSP backed it up with decent music.

Analysis: The penultimate song of the album is Jago Jago which was crooned by Raghu Dixit. The song starts off with a booming beat and the crescendo in the singer’s voice complimented by DSP’s thunderous beat makes it easily one of the best in the album. This song has got a good chance of becoming a chart buster in the market.

Analysis: Last but not the least is Dhimmatrigae song. This number is an out and out mass song in the entire album. Sung by Simha and Geetha Madhuri together, the vibrant music along with the funny lyrics was aimed at mass audience. This song will definitely end the album on a high note for its foot-tapping tunes.

With Srimanthudu, Devi Sri Prasad once again proves why he is the most sought-after music composer in Tollywood in the current generation. Although the tunes in all the songs are in a typical DSP style, they are quite impressive and exhilarating for the music lovers. Ramajogayya Sastry must be credited for penning catchy lyrics and all the singers have done a stupendous job with their vocals. Rama Rama , Jago Jago and Srimanthudaa are the top picks and Jatha Kalise is very pleasing to hear while Dhimmatirigae is a mass number. Concluding it, the album is a mixed bag which has something for everyone and surely lives up to its hype.