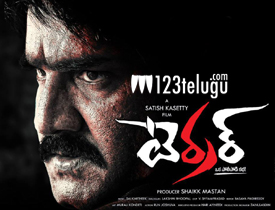 Family hero Srikanth, has been lying low from quite some time now. Loosing no hope, he is back with a hard hitting crime thriller titled Terror. Directed by Satish Kasetty, this film has hit the screens today. Let’s see whether Srikanth gets his much needed hit.

The story of the film is based on a sincere but suspended police officer called Vijay(Srikanth). Due to this issue, he faces problems with his father and lives away from his family. During one his investigations, Vijay finds out a small clue that something big is going to happen in the city.

He starts investigating the case and to his shock, he comes to know that a dreaded terror attack is being planned and his own department people along with some political big wigs are also involved. Rest of the story is as to how Vijay nabs these criminals and saves the city from this dreaded terror attack.

Srikanth is undoubtedly the star of the film. After a long gap, we get to see him in a author backed role which he plays it with aplomb. The way he goes about his character and underplays his emotions and stays in character is superb. This film will bring a huge relief in his career as the script and role suits his age and talent big time.

Screenplay of the film is very good and does not deviate from the topic even for a minute. The way some scenes featuring terror attacks are executed is splendid. Also, the detailing which has gone into the film is very impressive. After a long time, it is good to see Kota in a negative role. The supporting characters played by Ravi Varma and Nasser do their jobs pretty well.

Interval bang and the way all the scenes leading to the climax are showcased is nail biting. The makers should be credited for sticking on to the script and not adding any commercial aspects whatsoever.

Even though the climax of the film is good, it has been stretched way too much. The scenes featuring Kota and Srikanth and some unnecessary dialogues regarding the police department should have been edited out.

Background score by Sai Karthik is superb and elevates the film to another level. Dialogues are simple and to the point. As said earlier, screenplay is the soul of the film and is to the point. First half is slightly lengthy and should have been cut down slightly while editing.

Coming to the director Satish, he has done a good job with the film. Even though he has not showcased anything new, the way he has kept the proceedings simple and narrated the film with ample thrills is very impressive. Credit should go to him for being true to the script and not falling for the commercial format.

With Terror, Srikanth will definitely have a huge sigh of relief as his performance and the film are pretty decent. This is not a film which has popcorn entertainment and the regular masala which you are used to. All those who have an eye for crime thrillers and serious drama will end up liking this different film big time but the rest should go in well prepared.