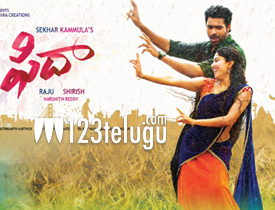 Shekhar Kammula is back after a long back with a youthful romantic entertainer called Fidaa. Starring Varun Tej and Sai Pallavi, let’s now see how the film turns out to be.

Varun(Varun Tej) comes down to India to get his brother married. There, he falls in love with Bhanumati(Sai Pallavi). As time passes by, love blossoms between the couple but they both do not disclose their love for each other. After going back to the US, Varun finally comes forward and proposes to Bhanu who in turn reject’s Varun’s proposal.

Why did Bhanu reject Varun’s proposal? What is the family drama behind this? and how does the pair end up marrying each other? That forms the rest of the story.

Fidaa has some beautiful moments in the form of comedy, romance and family emotions. Shekhar Kammula is in full swing this time around as he sets the breezy romance and adds some memorable family drama to it.

Varun Tej looks super dashing in the film. Even though his role will look as if the heroine dominates him but Varun’s calmness and the ease with his emotions make the film quite heart warming. This is the kind of film that an actor of his age should be doing and Varun is bang on this time.

As expected, Sai Pallavi is mind blowing in the film. Right from the first frame, she mesmerizes you completely. Be it her looks, Telangana accent and the way she carries the emotional scenes, she is a show stealer. Post-Fidaa, Sai Pallavi will be an even bigger rage all over.

All the supporting cast do well in their respective roles. The actress who plays Sai Pallavi’s sister is too good in her role and brings good depth to the film. Veteran actor Sai Chand is a quite memorable and gives an honest performance. Satyam Rajesh evokes good laughs.

The first half of the film is so good that one is bound to expect the fun and romance to continue which sadly does not. Even though there is good drama, the pace of the film goes down a bit.

The climax looks a bit hurried up as Varun’s change of mind could have been showcased in a more effective manner. The entire story is quite predictable so do not expect major twists and turns.

Dil Raju should be commended for shooting this film in a superb note. The Telangana culture is showcased in a stunning away and the realistic nature of the characters from the region have been shown well. Music by Shaktikanth is a major asset for the film. All the songs are set perfectly into the narration. Sai Pallavi and her dances are a dream in these songs. The camerawork is stunning as the beautiful and earthy visuals of both Telangana and US have been showed wonderfully.

Coming to the director Shekhar Kammula, he makes a comeback with a bang. The way he sets a simple story and narrates it with some good entertainment will be loved by the family audience big time. Shekar is at peaks when it comes to romance and his stamp is all over Sai Pallavi’s character as she is shown in a super strong manner who cares for her family and ambitions.

On the whole, Fidaa is one of the best love stories made in the recent times. The film has superb fun, good romance and moreover some moving emotions which will be loved by the entire section of the audience. The film is bound to do well in the overseas and A centers as it has clean entertainment. If you ignore the predictable story line, Sai Pallavi and Varun Tej will entertain you to the fullest. A must watch this weekend.