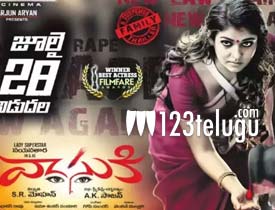 Continuing the trend of dubbed films, this week, the Nayanthara and Mammootty starrer Vasuki has hit the screens today. Let’s see how it is.

Vasuki(Nayanthara) is a simple housewife who leads a happy life with her family. One fine day, three close friends in her apartment rape her down mercilessly. An upset Vasuki keeps this as a secret from her husband(Mammootty) and takes revenge on her own. Well, how does she manage to do that is the entire story of the film.

Even though the story idea is quite a simple revenge drama, the way it has been narrated in the second half is impressive. The way Nayanthara takes her revenge and the twist at the end will surely surprise everyone. The slow motion shots and thrills showcasing the killings of the rapists have been executed quite well.

Mammootty plays his supporting role convincingly and his comedy touch to the role is good. Nayanthara is the show stealer as she plays the role of a rape victim with a lot of pain and agony. As she does not reveal her problem to everyone, the emotions with which she hides the pain has been showcased wonderfully by the star heroine.

The makers take for ever to establish the basic plot in this revenge drama. The entire first half is completely wasted as there are not many interesting scenes that will keep the viewer’s interest intact.

There is some Malayalam nativity in the film and this might put you off at times. All those who look for entertainment can stay away from this one which is a completely serious revenge drama. The chemistry between the lead pair during the first half lacks clarity.

As usual, Malayalam films have good production values as Vasuki looks quite simple and neat. Telugu dubbing suits the film well. Background score is very impressive and gives the film a lot of depth. Editing is below average as many scenes during the first half could have been edited out.

Coming to the director Saajan, he does an okay job with the film. The way he narrated the second half with good screenplay and thrills is very impressive. But it is very surprising to see him get wayward during the beginning. Had he managed the first half well and made things clearer for the audience the effect would have been even better.

On the whole, Vasuki is an interesting revenge drama which has a solid second half. But the twist here is that to enjoy this thrilling second half, you need to bear the boring and lack lustre first half. If you have such patience and love revenge dramas, Nayanthara will surely impress you with her sincere performance.