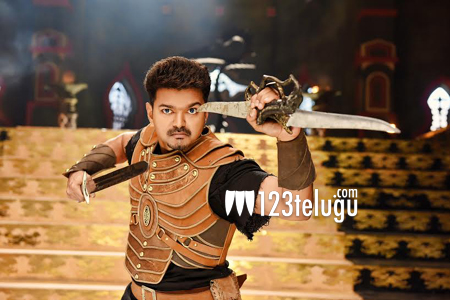 Tamil superstar Vijay’s forthcoming socio-fantasy film, Puli, is gearing up for a grand release on October 1st. Directed by Chimbu Devan, the film has Shruti Haasan and Hansika as the female leads.

As per the latest update, the film will be releasing across 3000 screens worldwide. Reports reveal that the screen count might well increase beyond 3500 due to the huge buzz on the film. It will simultaneously release in Telugu, Tamil and Hindi. Yesteryear actress Sridevi and Kannada actor Sudeep are playing crucial roles in the film. Devi Sri Prasad is the music director.