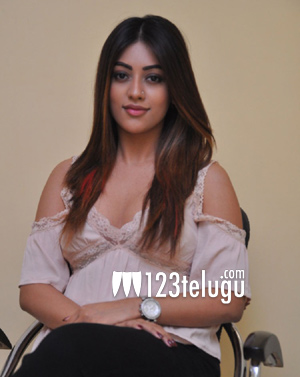 Action hero Gopichand’s much-awaited action, family entertainer, Oxygen, is finally hitting the screens on November 10th. On this occasion, we caught up with Anu Emmanuel, who is playing one of the female leads in the film, for a brief interview. Here is the transcript:

A) I play Dr.Geetha in the film. You should watch the film to know more about the role.

Q) Is this your first Telugu film?

A) Yeah, this was my first Telugu film. It was while shooting for Oxygen that I got an opportunity to act in Majnu.

Q) Wasn’t it a difficult task for you while uttering Telugu dialogues?

A) Yes, it was very difficult initially. But later on, I improved a little bit (Laughs).

Q) How did you get a Telugu film opportunity?

A) The director had traced my whereabouts after seeing my work in the Malayalam film, Action Hero Biju, and contacted me for this film. So that’s how I landed in Telugu films.

Q) How was the working experience with hero Gopichand?

A) He is a sweet-hearted person and a thorough gentleman. I knew that he is a big action hero here in Telugu, but he never behaved as a star on sets.

Q) Are you happy with the way your career is shaping up?

A) Yes. I’m very happy with my current phase. I feel blessed enough to work with Pawan sir and Allu Arjun at the initial stage of my career.

Q) Tell us about your role in PSPK25?

A) Yeah, I play one of the female leads in the film. My character has a good scope for performance and I’m eagerly waiting for the film’s release.

Q) Coming back to Oxygen, tell us about your director Jyothi Krishna?

A) He was very supportive during the shoot as I had zero knowledge of Telugu initially. He treated me like a child and taught my dialogues with lots of patience.

Q) What is Oxygen all about?

A) It’s an action film with a social message narrated undercurrently. As of now, I can only reveal that much. (Laughs)

Q) Are you open to glamorous roles?

A) In my view, there is a lot of difference between being glamorous and vulgar. So I’m always comfortable portraying glamorous roles.

Q) Lastly, rumors are floating that you have been roped in for NTR28. Is it true?

A) I have absolutely no idea about it. I pray that the rumors come true as I’m eagerly waiting to act with NTR.