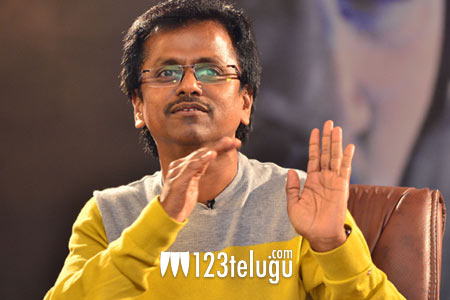 Some time back, we had an exclusive interview with talented director Murugadoss. On the occasion of Spyder’s release, we caught up with him one more time for a brief interview. Here is the transcript.

How did this story shape up?

In today’s day and age, there is absolutely no secrecy at all. If the government wants, it can find out the minutest detail from even the common man in the society. So, in such a situation what happens when an invisible terrorist takes advantage of it and starts creating chaos. How will the cops handle him? From this point, the story was born and I cast Mahesh as the main lead.

Why did you choose Surya as the main villain?

In my film, the villain is only mentally strong but not physically. So in such a case, I wanted an actor who is quite familiar in both the languages. Right from the beginning, the hero keeps fighting his enemy who is hidden and quite powerful. Both the villain and hero only meet during the climax.

How difficult was it shooting for a bilingual?

The day I felt that Mahesh is very good in Tamil and this film should be made as a bilingual, I made up mind that I will never cheat the audience with the visuals. Every scene and even the simplest of frames were reshot differently. Even the film has different background scores which were made keeping Mahesh’s popularity in both the languages.

How difficult is it to give a message in a commercial film?

Actually, it is very easy as a number of audiences connect to it right away. The impact is more and it is easy to blend the message in a simple and happy way.

The rock episode which features 2000 junior artists will be a huge key to the film. Also, there is a family episode during the film’s second half which will be the highlight of the film. Also, the way things are narrated in a racy manner will impress you completely.

Mahesh has become a close friend to me now. We share the same ideologies and in this film, he will be seen quite differently. He will be seen as a character and even his body language will be quite realistic.

How different is Spyder from your previous films?

Spyder is a full-on action film which will be quite realistic. All the elements showcased are quite real and will have a connection to each other. There is nothing forced and whatever is showcased is to the point.

Looks like there is heavy Tamil flavor in the film?

Yes! there will be some instances as I am a Tamilian. In films, it is the human emotion which connects everyone and nativity factor is not at all a problems these days.

Reports suggest that you have narrated a story to Prabhas?

Laughs ! Even I have heard the news. All these reports are just false and I have never met Prabhas in the recent times.

What happened to your film with Rajini?

I have narrated the story and Rajini sir even liked it. But as he had no date for the next year or so we need to wait for the film to roll.