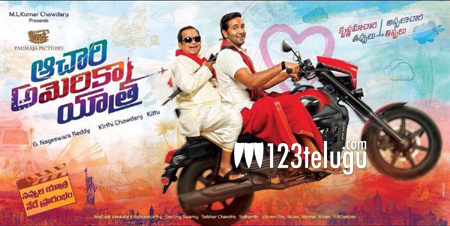 After recuperating from the freak bike accident during his ongoing comedy entertainer Achari America Yatra’s Malaysian schedule, Vishnu Manchu landed in the US for a major schedule. The actor has just wrapped up the American schedule and is on his way back to India.

Achari America Yatra was shot extensively in Los Angeles and Seattle, USA, apart from Kuala Lumpur, London and Dublin. Vishnu is quite excited about the way the film is shaping up. AAY also stars Pragya Jaiswal and Brahmanandam in prominent roles. G Nageswara Reddy is directing the movie and senior producer ML Kumar Chowdary is presenting it. Thaman is the film’s music composer