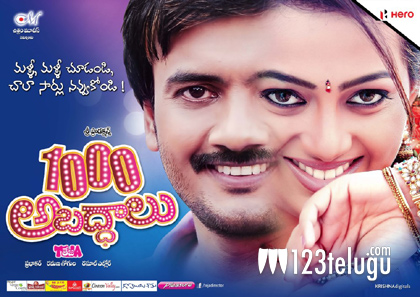 Sairam Shankar, Esther starrer 1000 Abbadalu is all set to hit the screens in mid August. Directed by Teja, the film was produced by Prabhakar under Sri Productions banner. The film was lying in the cans for a long time and finally, it is going to hit the screens on August 15. The film’s censor formalities have been completed and the makers are confident that the film will do well at box-office. Talking about the film, Teja said, “Nagababu’s characterization is going to be the main highlight of the film. He’ll be seen as a big fan of Powerstar Pawan Kalyan and his name in the film is Towerstar. 1000 Abbadalu is a full fledged comedy and we are sure that it’ll entertain all sections of the audience.” Ramana Gogula has scored the music and Rasool Ellore is the cinematographer.