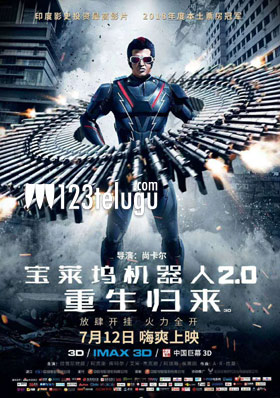 Earlier, the makers of 2.0 had officially announced that the film will be released in China in May 2019. Due to reasons unknown, the release was postponed.

Now, the latest we hear is that this film will be hitting screens all over China on July 12th. Releasing with the title, Bollywood Robot 2.0: Resurgence in the Chinese language, the film is going to be biggest IMAX 3D release for a foreign film in China.

Directed by Shankar, the film has Rajinikanth, Akshay Kumar, and Amy Jackson in lead roles, and it has already grossed Rs 500 crores at the Indian box office.