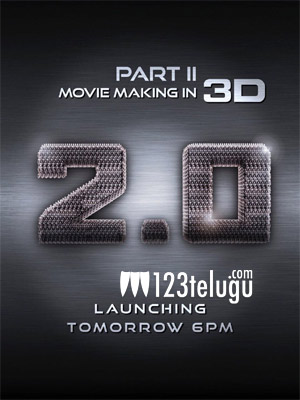 Super Star Rajinikanth and star director Shankar’s high budget sci-fi thriller, 2.0, is one of the most eagerly awaited movies in 2018. Currently, the film’s post-production work is going on in full swing. 2.0 will be hitting the screens on January, 25, 2018.

As per the latest updates from the makers, 2.0’s 3D making video will be released tomorrow at 6 pm. It’s already known that 2.0 was shot in 3D format.

2.0 will be released in Telugu, Tamil and Hindi simultaneously. Akshay Kumar and Amy Jackson will be seen in important roles in this movie. Lyca Productions banner is bankrolling this high budget visual extravaganza. AR Rahman is the film’s music composer.