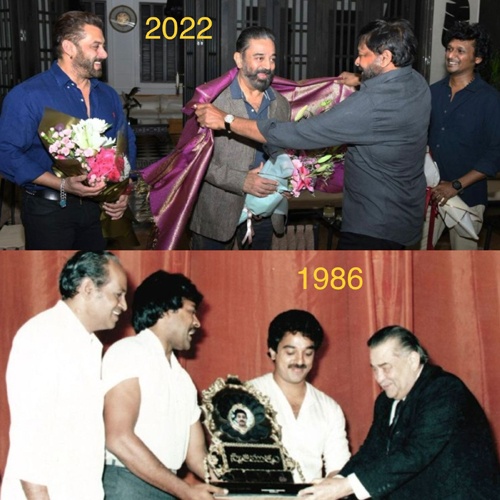 Everyone is aware that Kamal Haasan has scored a massive success with the action entertainer, Vikram, directed by Lokesh Kanagaraj. On this occasion, Megastar Chiranjeevi felicitated his friend and actor Kamal yesterday at his residence in Hyderabad.

Interestingly, the same scenario happened in 1986. A pic of Chiranjeevi honouring Kamal Haasan for the grand success of Swathimutyam has surfaced online after the recent incident. Bollywood’s late legend Raj Kapoor graced the event in 1986 while Salman attended yesterday’s event. Fans are super happy about their true friendship. The pic is now doing rounds on social media.

Coming to Vikram, the film has Vijay Sethupathi, Fahadh Faasil and Suriya in pivotal roles. Produced under the RKFI banner, the movie has Anirudh Ravichander’s music.