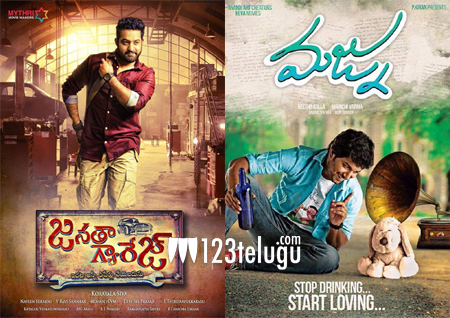 After facing a few setbacks at the box-office in August, Tollywood trade circles are hoping to strike back to end the third quarter with a bang. Tollywood movie lovers are awaiting an interesting blend of action and romance genre movies this September.

It will all start with NTR’s Janatha Garage, a high budget action entertainer which is releasing on September 1 amid unprecedented positive buzz. Then comes Tamil star Vikram’s much hyped action thriller, Inkokkadu, which is poised to hit the screens on September 8.

After being overwhelmed by the action extravaganza, movie lovers have a few romantic and comedy entertainers on their platter later in the month. Jyo Achyuthananda, Majnu, Eedu Gold Ehe and one of Chay’s two upcoming romantic entertainers, Premam and Saahasam Swaasaga Saagipo, may make it to the September marquee if things go as planned.