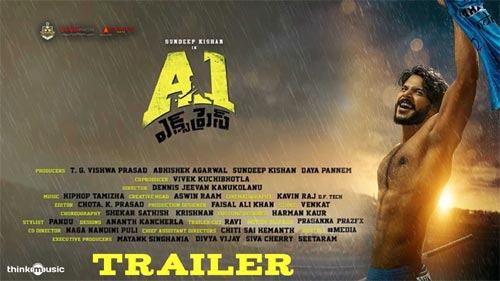 Sundeep Kishan is a super talented actor who is trying to get away from the comfort zone and do different films in his career. So, as a part of it, he is doing a hocked based film called A1 Express.

The film has been in the news for quite some time now and today, the makers revealed the trailer of the film. The first impression that you get from the teaser is that it is ambitious.

Sundeep Kishan is shown as the hockey player who is trying hard to bring the lost glory to the game of hockey. All this is nicely established in the promo and most importantly, the emotions impress you and are not forced.

More than anything, the amalgamation of commercial aspects along with sports drama looks best. Sundeep Kishan gets the best role and he is heroic, suave, and impreses you with a small emotional scene where he is seen sobbing constantly.

The film has Lavanya Tripathi as the heroine and she too looks good with Sundeep. A1 Express is directed by Dennis and looks like he has balanced all the aspects perfectly in the trailer.

There was a decent hype on this film and one can say that the trailer has surely reached all expectations. The film will be out on Feb 26th.