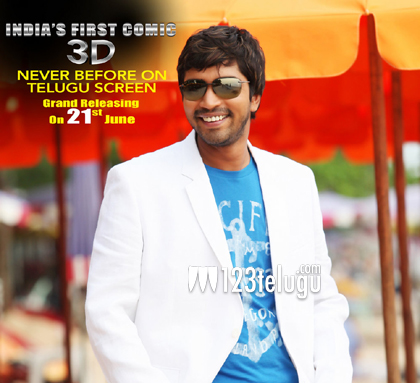 Comedy King Allari Naresh’s big budget entertainer, ‘Action 3D’, is all set to hit the screens this Friday in a big way. The movie is going to be premiered in Hyderabad on Thursday night as the producer is quite confident about the film’s output.

Anil Sunkara is the director and producer of this movie. He has worked on the film with a lot of passion and this movie is the most expensive production in Naresh’s career. ‘Action 3D’ is gearing up as India’s first comedy 3D film.

Kick Shyam, Vaibhav and Raju Sundaram are the other male leads. Sunil, Posani and Sudeep will be seen in important cameos. Brahmanandam, master Bharath and M.S. Narayana have taken care of the comedy. Bappi Lahiri is the music director.