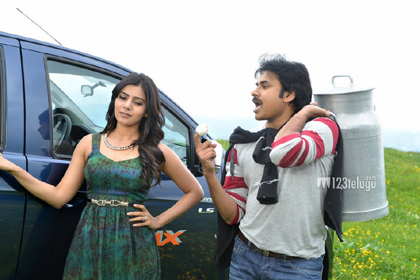 Power Star Pawan Kalyan’s ‘Atharintiki Dharedhi’ is in the final stages of post-production. The movie is being readied for a release on August 7th by producer BVSN Prasad. Pawan Kalyan and Samantha will be seen as the lead pair in this movie.

Praneetha is the second lead. Director Trivikram Srinivas has handled this family drama and the craze around the project is mind boggling. The film has been fetching terrific prices in all areas and Pawan’s fans are expecting a massive hit.

Devi Sri Prasad is the music director of this movie. Veteran actors like Kota Srinivasa Rao, Brahmanandam, Ali, Boman Irani and Nadhiya have essayed crucial roles in this movie.