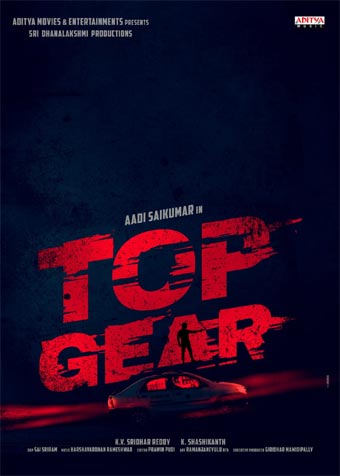 Adi Saikumar has lined up some distinctive subjects for his next few projects. He is presently doing a commercial entertainer being directed by Shashikanth, while Aditya Movies & Entertainments is presenting the film to be made under the banner of Sri Dhanalakshmi Productions.

The makers today unveiled the title of this crazy project. An engrossing title Top Gear has been locked for the movie and it’s an apt one for the genre of the film. The title poster alone generates lots of enthusiasm and suspense.

Aadi Saikumar plays an action-packed role in the movie and the title poster too gives the same impression. Riya Suman is the leading lady opposite Aadi in the movie.

Produced by K. V. Sridhar Reddy, the film has Giridhar Mamidipalli as the executive producer. Sai Sriram, who worked as a cinematographer for several superhit films, is working on the film. The music is by Harshavardhan Rameshwar.