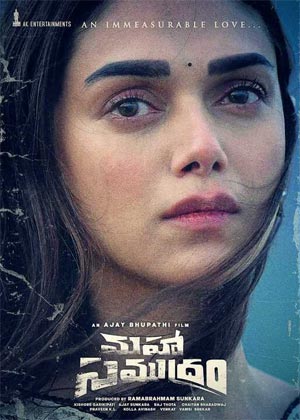 The makers of the upcoming romantic action drama, Maha Samudram, unveiled the first look poster revealing one of the film’s leading ladies, Aditi Rao Hydari’s look. The Bollywood actress looks painfully gorgeous in the first look and she seems to be playing a damsel in distress once again.

Maha Samudram also features Sharwanand, Siddharth and Anu Emmanuel in lead roles. The film is being directed by RX 109 fame Ajay Bhupathi and produced by Anil Sunkara. Chaitan Bharadwaj composes the soundtrack. The shooting is going on in full swing for the last couple of months and the film is slated for release on August 19.