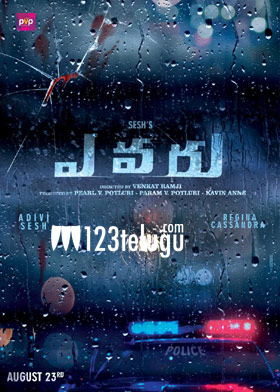 After leaving everyone guessing about the title of his film, actor Adivi Sesh is leaving a lot to anticipate even with the announcement. Titled Evaru, the film is a thriller directed by Venkat Ramji.

The title poster sees elements of thrill with a broken glass with blood stains on a rainy night with a police car overlooking it.

After Goodachaari, Sesh is keen to follow up with a hit. This film interestingly marks his collaboration with production house PVP Cinemas after their success Kshanam.

Also starring Regina Cassandra and Naveen Chandra in key roles, the film is set to release on August 23rd.