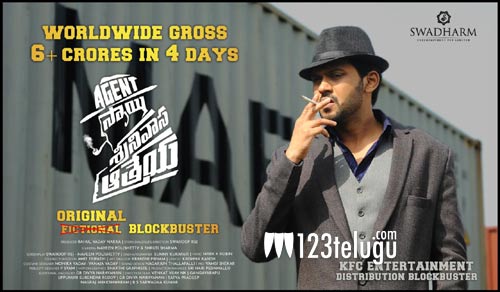 Amid a decent buzz, Agent Sai Srinivasa Athreya, AIB fame Naveen Polishetty’s detective comedy thriller, released last Friday and received a unanimous positive response from movie lovers and critics. The film is performing quite well at multiplexes, A centres and other major towns across the twin Telugu states.

As per the latest updates, Agent Sai Srinivasa Athreya has collected over 6 crore gross worldwide and is all set to land its makers and buyers in safe zone by Monday. This Swaroop directorial is expected to collect nearly Rs 10 crores by the end of its full run.

Agent Sai Srinivasa Athreya has been produced by Rahul Yadav Nakka and stars debutant Shruti Sharma as the female lead.