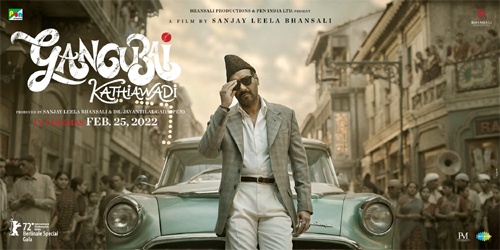 Alia Bhatt-starrer Gangubai Kathiawadi is one of the most anticipated Hindi movies in recent times. Directed by the marvellous filmmaker, Sanjay Leela Bhansali, the movie’s trailer is all set to launch grandly tomorrow.

Ahead of the trailer’s release, the makers have unleashed the striking character poster of Ajay Devgn, who is playing a crucial role in the movie. Ajay Devgn looks classy in a white shirt and beige pants. The checked blazer and the hat make him look royal in front of a luxurious car.

To note, Alia Bhatt and Ajay Devgn are also playing in Rajamouli’s RRR, scheduled to release on March 25, 2022. Billed to be a biographical crime drama, the movie also has Huma Qureshi and Emran Hashmi in significant roles.