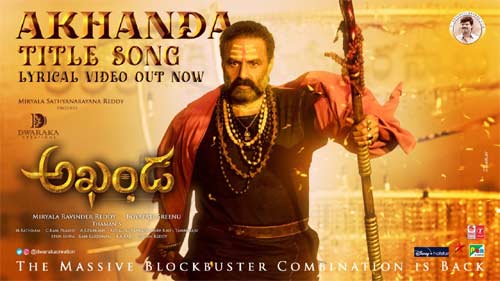 Promo of the title song of the movie was unveiled for Diwali to exceptional response and with double josh, they have come up with the lyrical video. The Mass Anthem Of The Year is rendered by S Thaman that has peppy vocals by Shankar Mahadevan and his sons.

But what really grabs our attention is Balakrishna’s getup as Aghora. Going by the visuals, the Aghora character is very intense and powerful. Ananta Sriram penned wonderful lyrics.

First and melodious number Adiga Adiga got an overwhelming response from music lovers. The title track gets an instant response and it is going to top the music charts.