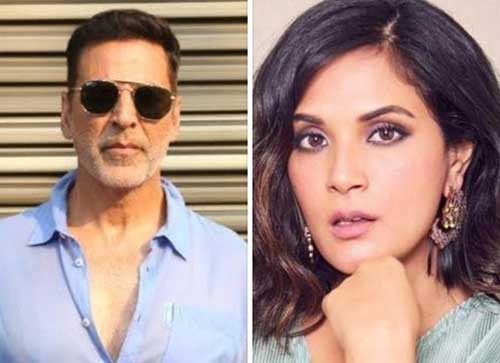 Richa Chadha is facing criticism from all corners for her remarks about the Indian army. The actress raised the topic of Galwan when an army official wrote that the military is just waiting for government orders to capture back Pakistan-Occupied Kashmir (POK).

This hasn’t gone well with most of the netizens, and a few are asking to forbid her movies permanently. Richa also came up with an apology note, but people are saying that she couldn’t come up with a lame excuse after disrespecting the army.

Now the star actor Akshay Kumar also took a dig at the actress and shared a tweet in this regard. He wrote that it hurts to see the comments made by her and added that nothing ever should make us grateful towards the armed forces. He stated that we all exist just because of him.

Hurts to see this. Nothing ever should make us ungrateful towards our armed forces. Woh hain toh aaj hum hain. 🙏 pic.twitter.com/inCm392hIH