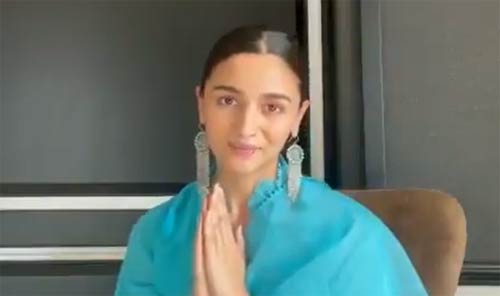 Star Bollywood actress Alia Bhatt, who is recovering from COVID-19, gave a special surprise for all the fans of Pawan Kalyan this afternoon. Alia released a special video in which she spoke in Telugu and wished the entire team of Vakeel Saab ahead of its release.

Alia started off her message by saying “Andariki Namaskaram” and went on to wish Pawan Kalyan and the team of Vakeel Saab on the release. “Fans, be ready, Vakeel Saab vachesthunnadu (Vakeel Saab is arriving),” said the talented actress.

And there’s another surprise awaiting Alia’s fans tomorrow. Her upcoming Bollywood period drama, Gangubai Kathiawadi, is getting a simultaneous release in Telugu and the film’s Telugu teaser is going to be screened along with Vakeel Saab tomorrow. Produced and directed by Sanjay Leela Bhansali, Gangubai Kathiawadi is co-produced by Jayantilal Gada and the film is releasing on July 30.