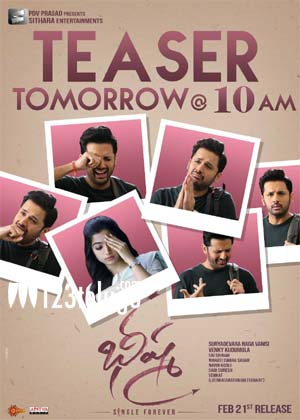 Bheeshma is a film that has created a good buzz for itself in the last few days as the single’s anthem has become a solid hit. The film’s teaser will be out tomorrow morning.

There is a superb craze for this teaser as it has Rashmika in the female lead. Many are excited to see her romance Nithin in the film. Yet another reason is that the film is being directed by Venku Kudumula who made the hit film Chalo.

The film has Sagar Mahati’s music and we need to see what would be this film’s storyline. The talk is that the movie has full-on comedy elements and how they will be shown in the teaser needs to be seen.