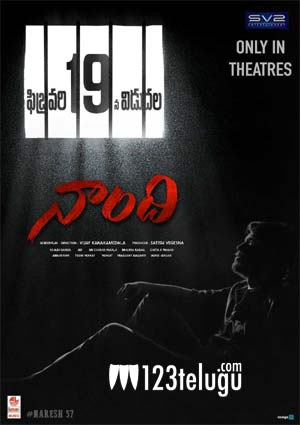 After acting in numerous comedy entertainers over the years, hero Allari Naresh is all set to surprise his fans with a serious role in his upcoming film, Naandhi. This intense and emotional drama’s teaser was released last year and set the expectations high.

According to the latest update, Naandhi has been scheduled to hit screens on February 19. Allari Naresh will be seen as a convict who awaits justice. Kollywood actress Varalaxmi Sarathkumar plays a crucial role in the movie. Debutant Vijay Kanakamedala has directed Naandhi and Satish Vegesna has produced it under SV2 Entertainment banner.