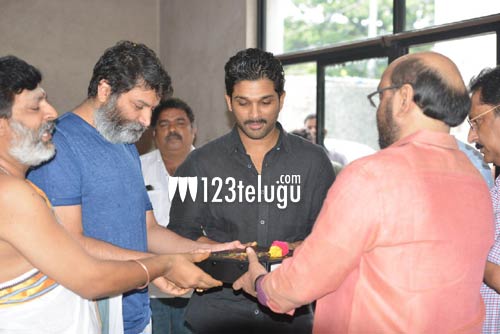 Allu Arjun and Trivikram’s highly-anticipated family entertainer is confirmed for the big Sankranthi release. However, the film’s unit is fast finishing the production formalities. And this morning, AA19’s dubbing work has begun with a formal puja ceremony.

Allu Arjun kick-started the film’s dubbing formalities at Shabdalaya Studios this morning. Nearly 40 percent of the film’s shoot has been wrapped up so far. This as-yet-untitled film has Pooja Hegde as its leading lady, while Nivetha Pethuraj too plays a prominent role. Tabu, Navdeep and Sushanth will also be seen in key roles in the movie.

Allu Aravind and S Radhakrishna are jointly producing the movie. Thaman is composing the music. Stay tuned for further updates.