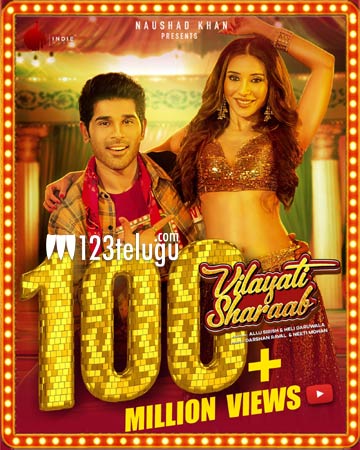 Hero Allu Sirish’s maiden Hindi music video ‘Vilayati Sharaab’ released in the last week of March and it went on to clock 100 million YouTube views. And Sirish’s elder brother and star hero Allu Arjun took to Instagram and said he is ‘super proud’ of his brother and congratulated the entire team of Vilayati Sharaab on this massive feat.

Incidentally, Sirish is the first South Indian hero to have debuted in the Hindi pop music scene and that too in such a huge note. The music video also features young beauty Heli Daruwala shaking a leg alongside Sirish, who aced some mass moves for the first time in his career.

Lijo George and DJ Chetas composed the song, while Darshan Raval and Neeti Mohan gave vocals for the lyrics penned by Kumaar. The music video was choreographed and directed by Adil Shaik.