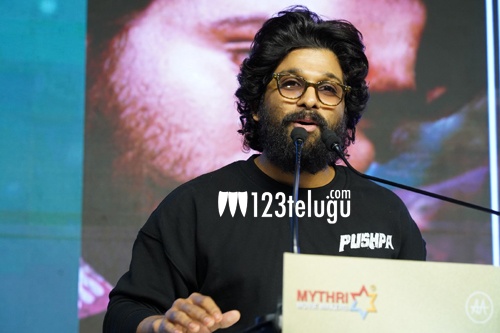 Allu Arjun is super high with the success of his latest film Pushpa. The film has made solid money and is still going strong.

The team arranged for a Thank You meet today and Allu Arjun spoke at length and thanked his entire team for the success of the film.

But the highlight was when he spoke about Sukumar. The Icon Star said that it is only because of Sukumar he has grown so far and became this Pan-India star. Both Allu Arjun and Sukumar had tears when Bunny was saying these lines.

Allu Arjun also thanked Devi Sri Prasad and said that it is only because of his hit music, he has gone deep into the audience’s hearts in India.

Allu Arjun also thanked each department by showcasing their pictures and what they did for the film. It was a very good gesture to see Allu Arjun thank each member personally.

Finally, he also revealed that irrespective of his film’s result, he will have a Thank You meet from now on in the future as well.