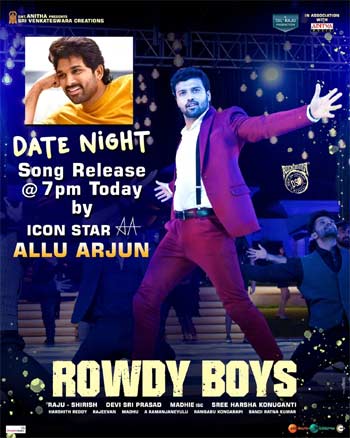 Icon Star, Allu Arjun, is currently enjoying the success of his recent movie, Pushpa: The Rise. Now, the actor is going to launch the next song from Rowdy Boys featuring Ashish Reddy and Anupama Parameswaran in lead roles.

Titled Date Night, the song is composed by the Rock Star, Devi Sri Prasad. The buzz is that the song will be released by the star actor at a special event about to happen this evening at Westin hotel, Madhapur.

The college-centric action entertainer is bankrolled by Dil Raju and Shirish under Sri Venkateswara Creations banner. Directed by Harsha Konuganti, the movie is all set to release on January 14.