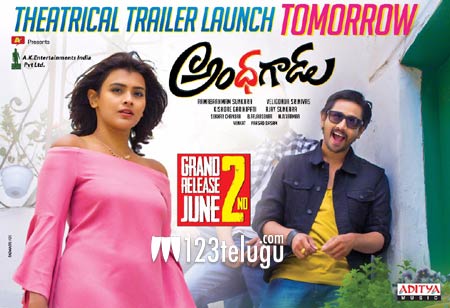 After the modest success of Kittu Unnadu Jagratha earlier this summer, young hero Raj Tarun will soon be seen in an intense romantic drama titled Andhagaadu.

The latest update is that the film’s theatrical trailer will be released tomorrow. In the movie, Raj Tarun will be seen in the role of a visually​ challenged ​young man. The film stars Hebah Patel as the leading lady.

Andhagaadu has been directed by writer Veligonda Srinivas and produced by Anil Sunkara. The film will hit the screens on June 2nd.