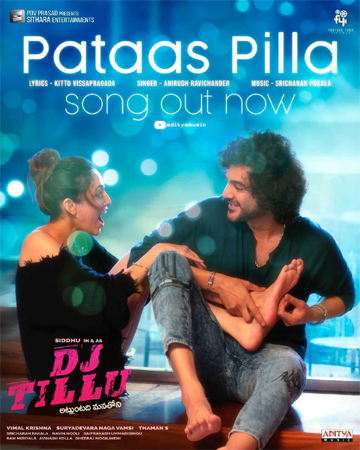 The second song, Pataas Pilla, from Siddhu Jonnalagadda’s upcoming movie, DJ Tillu, is out today. Composed by Sricharan Pakala, the song is crooned by the sensational music director, Anirudh Ravichander.

The romantic song, which has the wonderful vocals of the young sensation, Anirudh, is an instant hit and will rule the playlists of many musicophiles. Kittu Vissapragada penned nice lyrics. Also, the mass beat in it will make it worth listening to.

Neha Shetty is playing the lady love of the actor in the movie, which is directed by Vimal Krishna. Prince Cecil played a crucial role in this movie, produced by Naga Vamsi under Sithara Entertainments. The release date of the movie is yet to be announced.