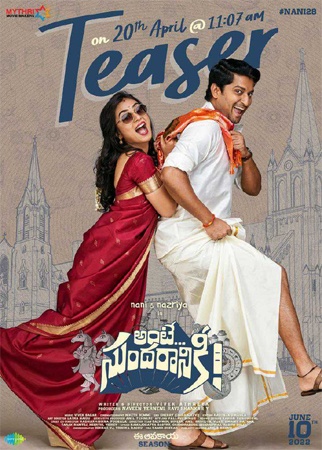 It is a known fact that Nani is doing a film called Ante Sundaraniki which is a breezy comedy. The film has also wrapped up the shooting part and the makers revealed it a few days back.

Today, the makers revealed two first look posters of the lead pair Nani and Nazaria in a different avatars. They are seen in traditional and western outfits and their chemistry looks quite wonderful on screen.

The poster also reveals that the teaser of the film will be out on the 20th of this month. The film is produced under the Mythri Movie Makers banner. Watch this space for more updates on this project. The film releases on the 10th of June.