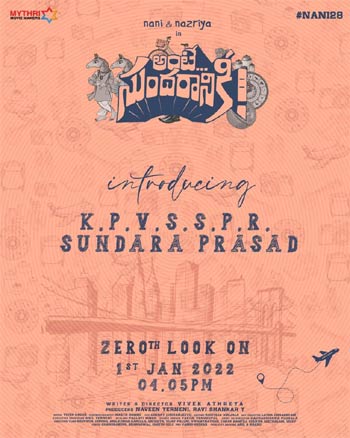 Nani is super high with the success of his latest film Shyam Singha Roy. He is also doing a film called Ante Sundariniki. The film is busy with its shoot and today, the makers announced something special.

The news is that the makers will reveal Nani’s look as ‘K.P.V.S.S.P.R Sundara Prasad’ from the film on the 1st of Jan at 4 PM.

The film is directed by Vivek Athreya and Mythri Movie Makers are producing it on a big scale. The name of ‘K.P.V.S.S.P.R Sundara Prasad’ itself has raised our curiosity and we need to see how Nani looks in this new role.