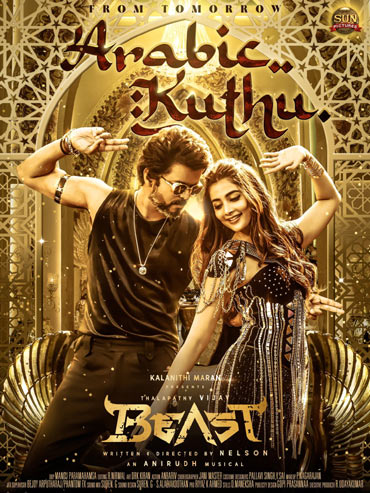 It’s all set for the grand release of the first song from the much-awaited Kollywood movie, Beast. Starring Vijay and Pooja Hedge as the lead pair, the movie is directed by Nelson Dilipkumar of Doctor fame.

Billed to the pan-world song, Arabic Kuthu, composed by Anirudh Ravichander will be out tomorrow. The makers have released a goldish poster featuring Vijay and Pooja Hegde. Besides, Sivakartikeyan has penned the lyrics for this song, which is crooned by the composer himself.

Produced by Sun Pictures, the movie is expected to release in theaters worldwide on April 14, 2022. Keep watching this space for more updates about the movie.