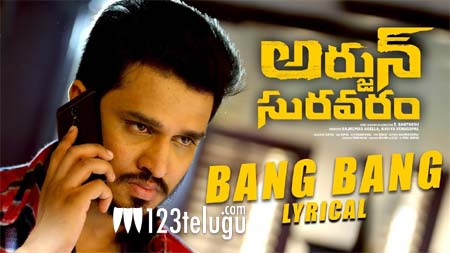 The makers of Nikhil and Lavanya Tripathi’s upcoming investigative thriller, Arjun Suravaram, unveiled the film’s third single ‘Bang Bang’ this evening. The impressive song gives an insight into the protagonist’s investigative journalist character, the risks he takes and the dangers involved in unearthing a crime.

Bang Bang is loaded with trance-like retro music. The song is funky, moody and also has an interesting rap by Sri Lankan rapper Spike. Arjun Suravaram’s music composer Sam CS has crooned the song which is penned by Varikuppala Yadagiri.
Tamil director TN Santhosh has directed Arjun Suravaram and Auraa Cinemas and Movie Dynamix banners have jointly produced it. Tagore Madhu is presenting the film. The film is slated for release in the last week of May.