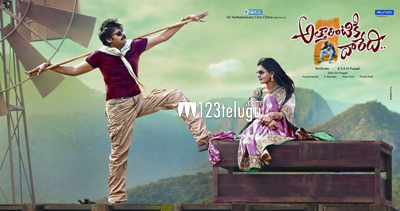 Power Star Pawan Kalyan’s ‘Atharintiki Daaredhi’ is showing no signs of slowing down. The movie has breached the 40 Crore mark (worldwide share) within the first week itself. As per trade sources, the total AP share for six days is approximately 32 Crores. With a stunning overseas performance, the tally for six days has gone past the 40Cr mark comfortably.

The movie is expected to have another bumper run this week, as there are no major new releases at the Box Office. Analysts say that the film is certain to end up as one of the highest grossing Telugu films of all time. But will it be the No.1 film? We will have to wait and see.

Pawan Kalyan and Samantha appeared as the lead pair in this movie and Trivikram Srinivas is the director. BVSN Prasad has produced this movie.