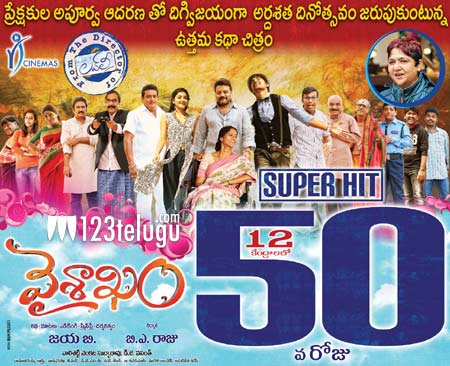 Lady director, B Jaya’s latest film, Vaishakam has now successfully completed its 50 days run in 12 centers all over the Telugu states. Speaking about the film’s success, B Jaya said that the novel point in the story line attracted the family audience big time and made the film click.

Producer BA Raju also thanked the media and audience for receiving the film quite well. The film’s music director, D J Vasanth also impressed everyone with his tunes.

Vaishakam had newcomers Harish and Avantika in lead roles and their chemistry was quite impressive. Saikumar was seen in an important role in this film which was a romantic youthful entertainer.