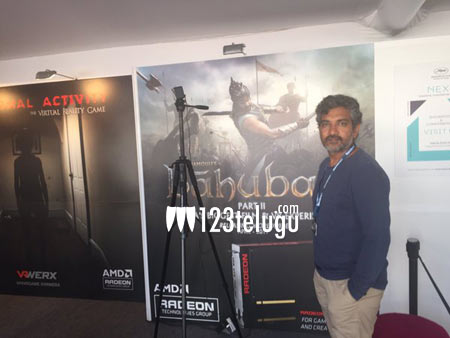 Team Baahubali is truly taking Telugu cinema global with their prestigious movie. The film “Baahubali” is now making a huge splash at Cannes, with its VR (Virtual Reality) themed stall. The film unit has set up a pavilion there to showcase their interests in coming up with a VR experience for Baahubali, as well as to showcase a VR game based on Paranormal Activity.

The movie has teamed up with AMD’s Radeon Technology Division for this VR pavilion. Chipmaker AMD is backing Baahubali and it’s Visual effects department in a big way. A number of celebrities have visited the Baahubali stall to learn more about this first crossover film from India.

The second part of the movie will be released in April 2017 across the world. Rajamouli SS is the director of this movie and Arka Mediaworks is the production house.